Evidently 70% of British adults, and a staggering 76% of Scottish adults, would trust a fictional dog over our current political leadership to run our country, according to a survey commissioned by PickUp! biscuits.

Are we really so dissatisfy with our current leaders? No, that’s not a trick question 😉

I know I am at the moment.

I am not sure I would go so far as putting my trust in a dog, but who knows… it might be or at least needs to be a very special dog…

Additionally, and a much more believable response from the same survey revealed that 73% of dog owners believe their dogs can demonstrate “special skills”, so in line with this discovery PickUp! biscuits has now launched the ultimate hunt for dogs that demand respect!

The competition starts today and who knows in the process maybe we can find that very special dog that could indeed be our leader and run this emerald island.

As you are probably aware, starting today a whole eclectic band of dogs will line up for the doggy equivalent of the Olympics, more commonly known as Crufts, but if like the majority of us you’re not going to be part of this band, you might just want to consider joining in with the Ninja Dog Championships.

PiCKUP! biscuits contain chocolate so sacred that they have to be protected by their very own Ninja Chihuahua, (you have probably seen him on TV) – who is now on a nationwide hunt to find the final canine contestant to take part in his Dogs that Demand Respect, Ninja Apprentice Championships.

Could your dog be awesome enough to take part and become a member of the #ChocNinja crew?

If you aren’t sure whether their skills will suffice, check out the current team members and what they can do…

Will you be entering your dog?

Does your dog have any “special skills”?

When I think about Lilly and Bunk, the only ninja power that comes to mind unfortunately is their ability to track down any unattended food for stealing, which they then do faster than the blink of an eye…

The Christmas season is in a full bloom so it is time to get some festive food ready. What can be more festive than some tasty little gingerbread cookies?

The recipe I want to share with you today is from The Christmas 3D Cookie Kit from Parragon. The kit contains 3D cookie cutters (so you can make your own 3D snowman and 3D Christmas tree) and a recipe book with a fantastic selection of Christmas cookies.

The recipe I’ve chosen was originally for a Mini Gingerbread House Cookies, but we thought that a gingerbread man shaped cookies will be a better choice 🙂

Place the butter and the golden syrup in a pan and heat gently, stirring all the time until melted.

Remove the pan from the heat, add sugar and stir until dissolved.

Sift the flour and ginger into a large bowl and make a well in the middle ready for the wet ingredients.

Pour in the warm, wet ingredients and add the beaten egg into the mix.

Wrap it in a cling film and chill in the fridge for about 20 minutes.

Remove your dough from the fridge and prepare to roll it out; ideally you want your rolled dough to be about 5mm thick.

Cut desired shapes using a cookie cutter or an upside down glass if you want to make a classic round shape or even a knife if all else fails.

Chill in the fridge for a further 10 minutes.

Bake in earlier preheated oven for about 12-15 minutes or until firm and lightly brown.

Remove from the oven and allow them to cool down.

Now the fun can begin…

It is time to decorate! 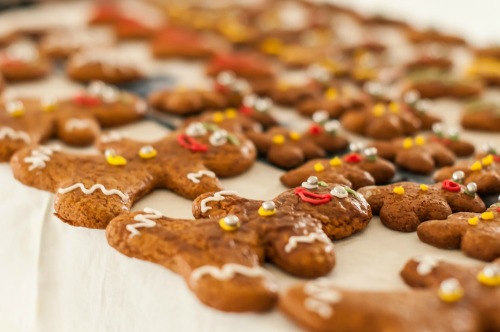 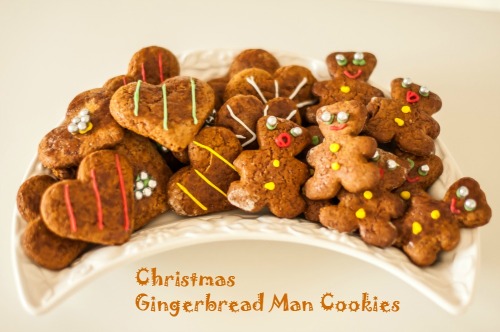 From time to time we all get cravings, sometimes we can satisfy them, sometimes we can’t. One day last week sometime around 11pm I developed a huge craving to have some fresh baked cookies. We had guests over so it wasn’t exactly sleeping time yet so we decided to bake something. Obviously we knew that this had to be a quick and easy recipe as no one wanted to start a long preparation process at that time of the night. We settled on a batch of Quick and Easy Cinnamon Biscuits. As there were four people in the kitchen including a fellow foodie blogger Iwona from Smakowite Jadlo, we had a lovely warm biscuits in no time!

So if you ever get that feeling you must have a cookie now, I would highly recommend this recipe.

In a large bowl mix all your dry ingredients: flour, cinnamon and sugar. Add soften, cubed cutter and combine until you have a nice smoo0th and even dough.

Now depending on the shape of your cookies you can either:

– Form small balls which you will shape into roundish biscuits with your hands.

or (my preferred way)

– Roll your mixture flat using a rolling pin and then just use a cookie cutter to achieve your desired shape.

Bake in your earlier preheated oven for about 15-20 minutes or until firm to the touch.

Remove the biscuits and place on a wire cooling rack so they are allowed to cool.

Decorate if needed or desired. They are perfect for storing, as long as you put them into an airtight container of course.

Now remember there were four of us in the kitchen and we all wanted something just a little bit different, we just couldn’t seem to settle on just one flavour, biscuits by committee! As it is a democratic household we ended up baking four batches of biscuits in four different flavours 😉 So if cinnamon is not for you, you can try adding some grated almonds or chocolate or dry coconut (our coconut biscuits also had an orange food colouring, I am quite unsure what we were thinking at the time but I suspect that a degree of tiredness may have resulted in the wrong bowl receiving the colouring. Though witnesses were few and far between…)

In the end for what amounted to less than an hour of fun and good humour in the kitchen, delayed somewhat by the deliberations over flavours, resulted in a huge box of awesome crunchy and super tasty biscuits. Possessing a wonderful snap when you bite into them and having a texture very similar to shortbread they are now a permanent feature on our “bestest recipe list”.

McVitie’s BN Biscuits in connection with BritMums have challenged bloggers to write about their 42 Days of Summer. The brief was very open – tips, ideas and inspirations, whatever you do to make it fun was allowed. I wanted to be the part of it, so here I am.

At first I was thinking about making a day out post, or maybe some fun summer cooking recipe or something crafty, but finally I settled for a kind of tip / advise post.

So how do we assure that the 42 Days of Summer are actually fun?

Well, let’s start with making a list and listening to the kids. Put on the list all those small things that they have always wanted to do. Ok, I must admit that most kids will have a Disneyland or a Legoland trip at the top of their list, but when you really ask them want they want, you might be surprised by some of their choices.

Kids think differently and their pleasures are totally different from ours. They might really want that PJs party you never got around to throwing during the school year, or a movie night with friends, when they can just lounge around in their onesies and stuff their face with popcorn or maybe they still didn’t fulfil their desire of building a den under their bed (I would not advise this if you have a standard bed, we have a mid sleeper so it is doable). A nice family picnic is a great day out and it will not cost a fortune. How about a trip to the woods, this can be very knowledgeable, walking around the trees, picking all the gifts from nature, which later on can be used in crafts or some lovely handmade decorative arrangement.

Every family member is supposed to make a list – short or long – this is up to you, then try to pick at least 5 things from each list to do over the summer.

This way everyone gets something they wanted and we can learn from one another and hopefully discover something new and exited we never thought we would enjoy.

Maybe your other half wants to go fishing, so we all go. Who said that fishing can’t be fun? Learning about different rods, different type of fishing and not to mention the excitement when you finally hook a fish.

Summer is always a great time to plan for the future; check out new clubs, try new sports… who knows maybe that one trip to the swimming pool you just took will result with your child regularly going to a swimming club after school or becoming a great swimmer?

So, whatever you do over summer, remember that it is all supposed to be about fun.

* This post is an entry for 42 Days of Summer Linky Challenge sponsored by McVitie’s BN. Learn more at http://bit.ly/1mRpMCL