Two weeks ago, on the Sunday evening, Lilly started to choke… or so I thought. There had been chicken for dinner, the dogs had had chicken just to make it clear, I am not even sure we had a dinner this day 🙁 so anyway I started to freak out that maybe I had missed a bone or something… She would cough and make a hideous choking sound for a minute or so and then stop. She wasn’t breathing heavily or behaving weirdly (or at least I would say no more weird than usually) so I decided to let it be and keep an eye on her and see how things will improve.

On Monday and Tuesday things stayed more or less the same. Every now and then, especially when she was moving or running she would make a coughing sound but as she had a good appetite and was eating as normal as well as being in a great spirit we didn’t really think that she needs to see the vet.

Wednesday was a crazy day for us as we were going to Bradford for my billboard shot. This meant an earlier start and most of the day in the car. We arranged for the neighbours to look after the dogs whilst we were gone. We got up, I ventured to the bathroom in order to make myself look presentable and Mark took the dogs for their morning walk.

About 15 minutes later I heard the door opening. “It was a short walk” I thought. This thought was met with a yell from the doorway – “We have a problem!” Hardly dressed with only half of my make-up on I run downstairs to find out what has happened. “We have a problem with the dogs. I just made 12 people leave the field in a rush yelling at me that our dogs are sick”.

“Brilliant, this is just what we need today!”

Apparently someone pointed out to Mark that both Lilly and Bunk at this point (as he started his coughing during the night) have kennel cough. I wasn’t even sure what to think as I have never had any dealings with this disease.

So instead of getting ready for my Big Day I turned to Mr.Google for help. First thought obviously was cancel the event in Bradford and go to the vet – but as it was so early in the day I decided to read some more and actually find out what are we talking about. The information was sketchy at best. Some websites stated that it is not a big deal and it will go away, others that it is serious and three weeks antibiotics course is in order. We really didn’t know what to do! The vet as it turned out couldn’t see us till the afternoon as when I called the vet to arrange the appointment and told the nice lady on the reception “I think my guys have a kennel cough.” She said “Ok, come in with them but don’t you dare bring them in. Just let me know when you have arrived at the car park”. “This will be fun”, I thought.

So finally we made the decision – we were still going to drive to Bradford but return straight after the photo-shoot in order to see the vet in the afternoon.

So we went and we returned… As it ended up we were seen by the vet in the spare examination room… in the basement. One hour later, and after many, many tests, some poking and general checking, not to mention the sucking sounds as £60 was hovered out of the bank account the verdict was in – They do not have kennel cough! 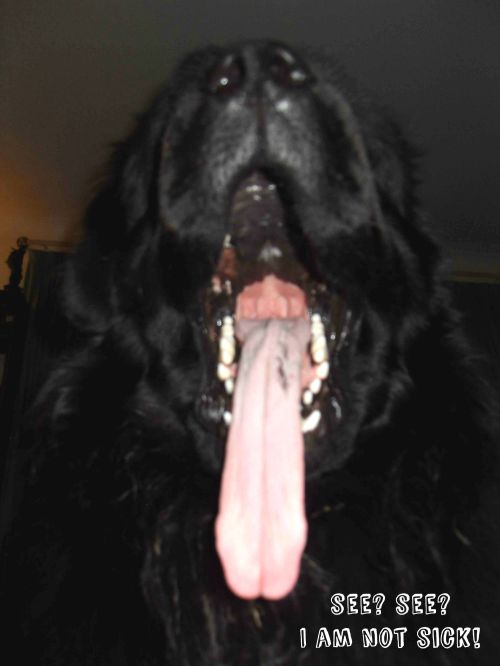 It is highly possible that they caught the bug but because they are vaccinated every year the disease didn’t have the chance to fully develop and the cough will go away on its own.

We also got the green light for walking with them with other dogs and that it was perfectly safe for them to go where other dogs walk – they can’t pass it on.

So now, all you lovely dog walkers in my village who ran away shrieking and accusing us of spreading kennel cough which one of you wants to help me pay my vet bill?

29 thoughts on “The one about kennel cough”

I love all comments :-) Cancel reply